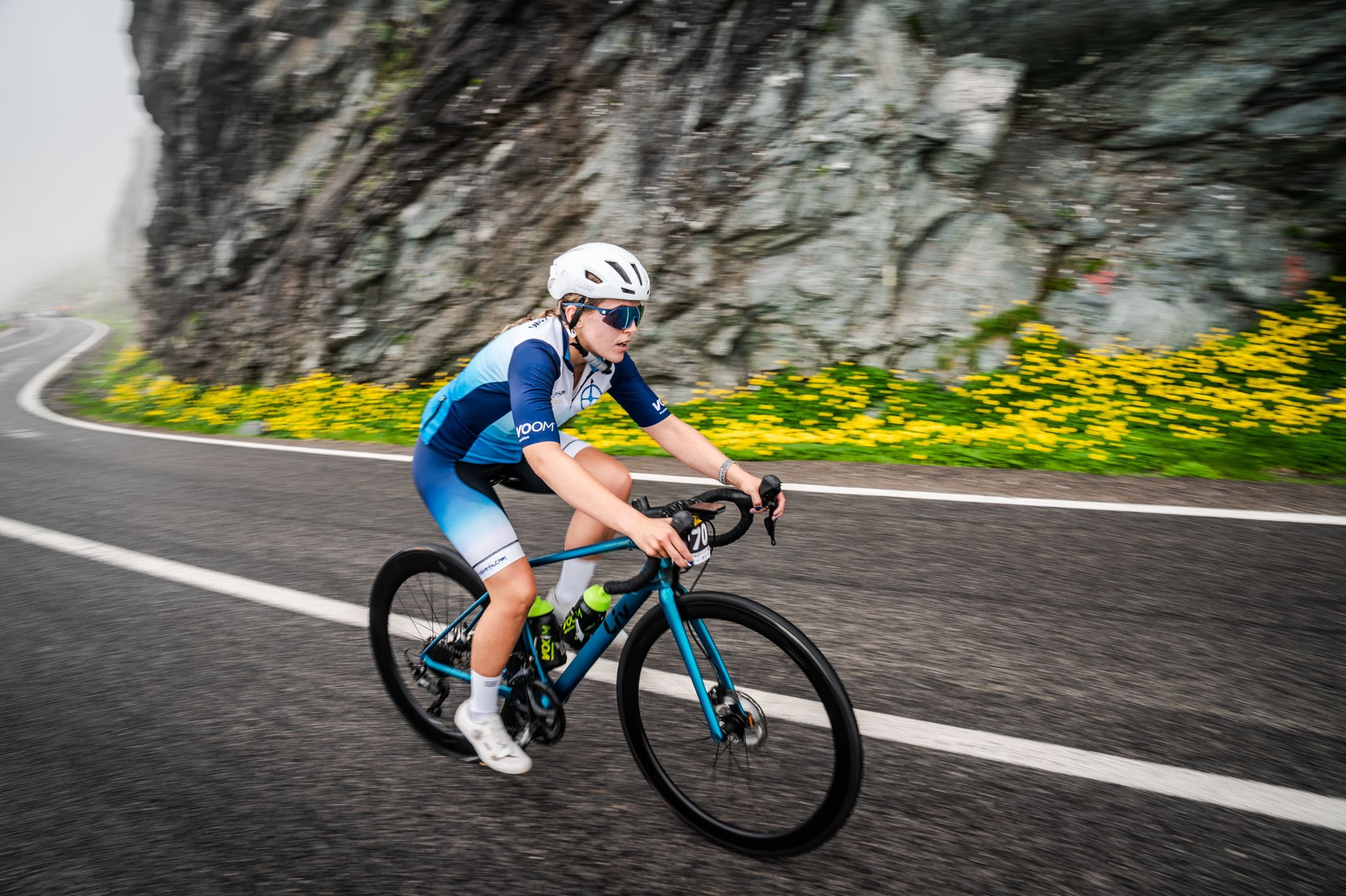 Transfagarasan Challenge gives cyclists a chance to race an epic climb on closed roads & Christie Byrne made the podium!

The Transfagarasan Challenge took place on Monday 4th July 2022 with over 500 lucky riders making their way to the top of this iconic road at varying paces. The athletes had the unique opportunity to race up "the best driving road in the world" under closed road conditions as a pre-event to Stage 2 of the UCI Sibiu Cycling event. You can read about the pro action in stage 2 here. The leaders across the line in this 2nd edition of the event beat the challenge in a little over 75 minutes, with other finishers coming in for some time. VOOM had three riders in the event, all representing "Pedalnorth Presca Powered by VOOM" - a collaboration team. It really was an epic event, with high temperatures testing the resolve of the cyclists during the 27.5 km race which finished beside the Balea Lac at just over 2,000m altitude. With temperatures around 30 degrees at the base of the climb, and 15 degrees at the top there was a real risk of dehydration so all three riders had VOOM Hydrate in their bottles. First of the team to the summit finish was Beau Smith who wasn't too far behind the male winner in a time of 1:30:44, and looked strong right to the finish line. Afterwards we asked Beau a few questions about one of the toughest cycling climbs in Romania.

How was the event?

"It was a fantastic event and to ride the final climb of the Sibiu Cycling Tour queen stage on close roads was a unique experience. There was a 7 or 8km 'neutralised' roll out at the start where we were held behind lead cars at a steady pace to the start of the Transfagarasan climb at Cârțișoara. Everyone was jockeying for positions, keen to be up at the front and when the racing started the pace was full on. I tried to keep to my own pacing as much as possible so settled into the third group and focused on my nutrition." How difficult is the Transfagarasan Road?

"On the whole its a tough climb, its 25km of uphill and although its not the steepest under race conditions its still full on - every time the gradient eases slightly I tried to maintain my power output and pick up the pace. That's the only way to stick with the bunch you're riding with!" What nutrition did you use during the challenge?

VOOM gives me the perfect nutrition options for a cycling event - obviously first thing was the Hydrate Smart so I sipped 750ml of it in the 90minutes before the start and another 500ml during the 90 minutes of racing. My bottle for during the ride was made at 1.5 strength as I know I'm a fairly heavy sweater, especially in that heat whilst riding uphill!

An hour before the ride I had a Raspberry and Beetroot Bar which topped up my energy between breakfast and the ride, and the nitrates from the beetroot help aid blood flow and boost endurance. Once the riding started I took one one square of VOOM Pocket Rocket every 15minutes, using 3/4 of an Electro Energy Bar and half a Caffeine Kick. I used the electrolyte energy bar in the earlier stages as it was warmer and I sweated more heavily then the caffeine energy bar in the later stages as I was tiring to give me a real boost and get me to the line!

The stand out performance of the day from a VOOM perspective was by VOOM ambassador Christie Byrne who came home in an amazing 2nd place in her category, with whoops from the rest of the VOOM team as she stood on the podium. It was a phenomenal performance in Christie's first standalone cycling event outside of multisport. What did you eat whilst riding the Transfagarasan Highway?

I used the Beta Blast and Electro Energy Pocket Rockets for my carbohydrate intake. I got through 2 bars (equivalent to 4 energy gels) in just under 2 hours. I used the orange bar as I know the Beta Alanine helps buffer against lactic acid so I could try and push that bit harder up the climb.

I drank almost 2 x 500 ml bottles of VOOM Hydrate electrolyte drink to keep me hydrated, and couldn't wait for a Recover Fudge at the end! Robert Thorpe, lead editor for Pedalnorth, had set his own goal of simply pedaling none stop to the top, and with his bottles filled with VOOM Hydrate and using the Electro Energy Pocket Rocket, he finished within 3 hours. How did you handle cycling in the hot conditions? Beau mixing up his Rapid Recovery shake post race, with the epic Transfagarasan Highway Road behind.

Full event results for the T. Challenge can be seen here.