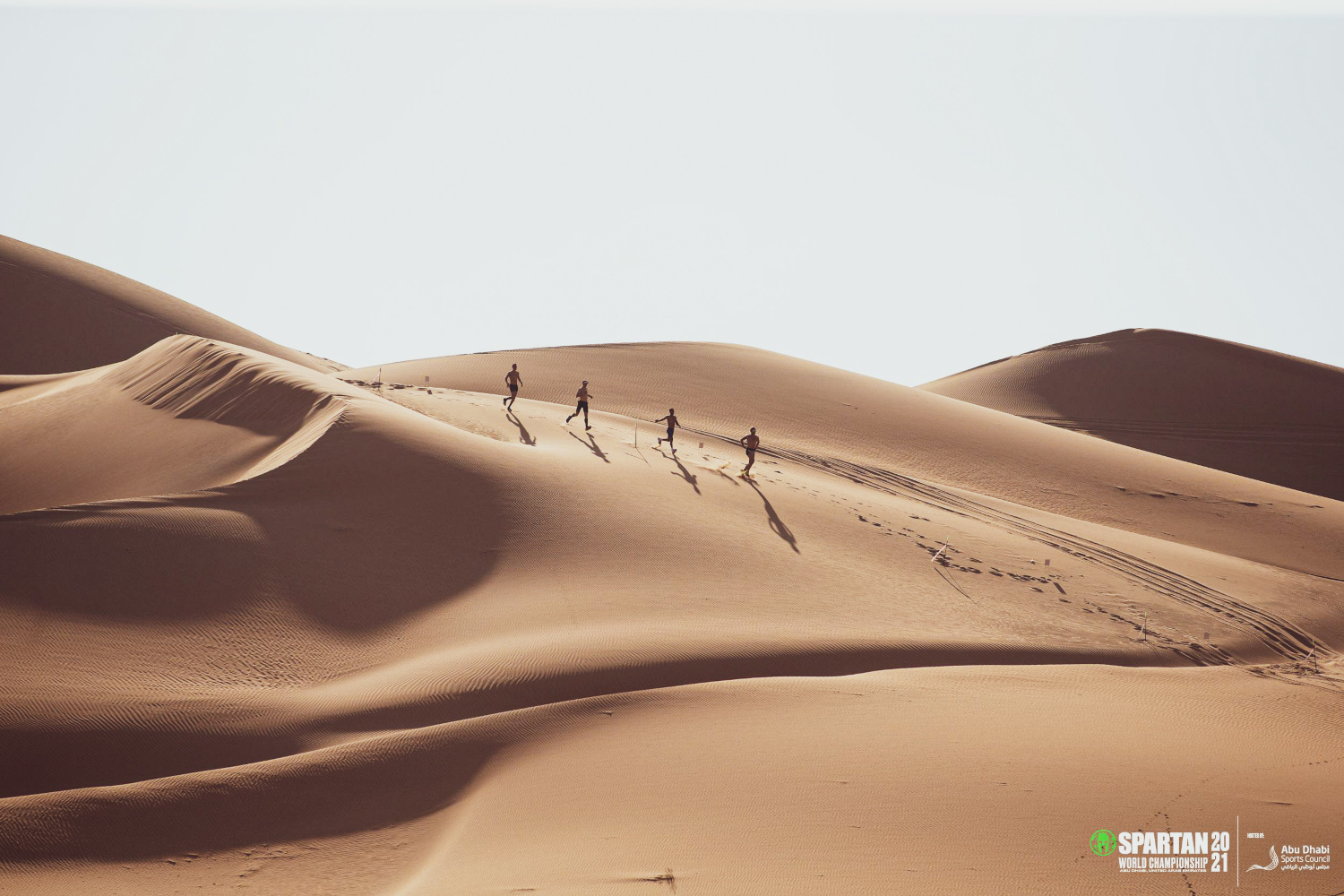 The 2021 Spartan Race season concluded in the depths of the Liwa Desert, Abu Dhabi, as athletes from across the globe travelled to tackle the 22 km, 700 m elevation, 34 obstacle Beast World Championship course. This was the first time the Championship has been outside of North America and the course was run entirely on the sand of the Moreeb dunes - quite different from the rain and mud of the UK Spartan Race series! Voom Ambassadors Becky Neal and Federica De Caria qualified for the Elite race having finished 3rd and 4th in the UK & Ireland Spartan Race Elite series across 4 events around the UK in 2021.

On top of our usual work and obstacle race training we spent the weeks leading up to the event doing as much as possible to prepare for this totally different race including heat acclimation sessions, sand running and kit testing. After the 7 h flight and Covid travel hoops, we arrived with teammates from the UK several days before the event and had time to explore the water park, F1 circuit, Ferrari World, beaches, the Grand Mosque and get used to Abu Dhabi. The international athletes all travelled together on a coach to the Moreeb dune - a venue usually reserved for car racing up the dunes. The event village included a huge stage, cultural displays, practice obstacles, food options and the first night included an impressive firework display. All athletes were staying at the venue and we had brought our own tents to camp out on the sand, which worked out surprisingly well, despite not having much sleep thanks to the noisy car racing surrounding the camp site. Race time was 3:30 pm - still 30 degrees C and it was difficult to keep cool in the run up to the start but cold showers, shade and good kit meant we were prepared. The race started on the sand uphill with wall obstacles making the initial climbs even slower. The sun was strong but the monkey bars were dry and some occasional soft downhills and flat portions of the desert made for some faster running as we ticked off obstacles like the heavy carries, cargo nets, traverse walls and rigs with ease.

At approximately halfway we faced the most commonly failed obstacle in Spartan Racing - the spear throw. With only one shot at each obstacle in these races and a penalty of 30 burpees for failure, we found ourselves counting these out side by side before embarking one of the hardest climbs/crawls of the race. It soon became dark and the head torches were lit but it was still warm and the climbs were even steeper with one even requiring a rope to get up it and all of them taking longer than normal with the sand disappearing backwards beneath our gaiters-clad shoes. We completed Spartan’s other standard obstacles including Twister, Tyrolean Traverse and Stairway to Sparta. After 13 miles and over 3 hour we met the second heavy sandbag carry before reaching the crest of the tallest dune in the United Arab Emirates at 300 m high. It might take 30 mins to climb the Moreeb Dune but it only took a minute to run down it thanks to the 50 degree gradient and deep soft sand into the final gauntlet of obstacles.

These consisted of the hoist followed by a new combination on the rig: monkey bars into twister into swinging rings, which was really fun to complete! The race concluded with running up the slip wall, over the fire and down the home straight to meet the UK supporters and a shiny new World Championships medal.

The next day we watched the age group race and created three GB teams for the 11 km team relay which is always exciting. We rounded out the trip with rooftop celebrations back in Abu Dhabi and I also went on to explore the sights on Dubai for a few days before traveling home safe and with plenty of memories to survive the Winter. Marathon Diet Guide: What to eat whilst marathon training Part 1